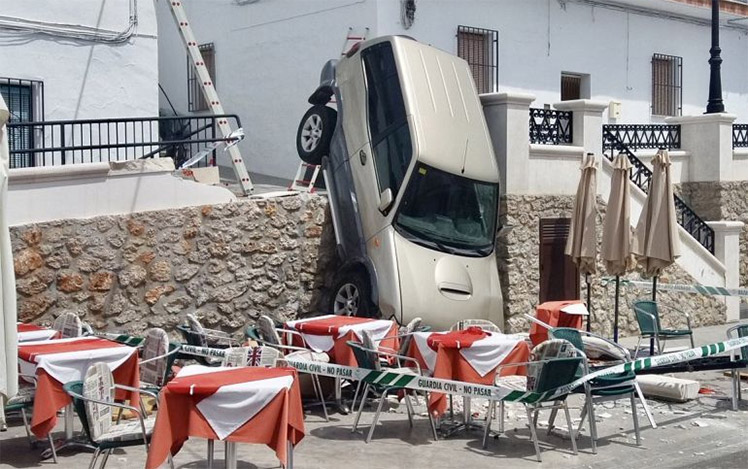 Did you know that in Spain, there is no minimum mandatory hours that you need to learn driving? If you can pass the theory and the driving test, you get your driving license. In case you just got the inspiration to get a Spanish driving license, guess what, it’s get even easier for you because the theory test is available in English, you don’t even need to speak Spanish to pass it.

I am not sure, but I guess the lack of minimum requirement in terms of driving practice hours has resulted that there are so many bad drivers in Malaga. Before I come to Malaga I sold my car, and I can honestly say that it was a good decision. If you look closely, you can see that there are barely any cars parking on the street that don’t have dents, scratch marks. A friend of mine told me that in every half year her car needs some bodywork, polishing and painting, it gets so run-down in this city.

If you are driving around in Malaga, get ready for the following: Other drivers don’t use the indicator lights, they just change lanes or make turns on the sudden. They also love driving on the divider lines between the lanes. Maybe they think they play PACMAN and they have to follow the dots around? They love to drive to slowly without any apparent reason, or simply fall asleep at  the green light. Actually, one of the main reasons they don’t start when the traffic light turn green is because they usually stop too close, almost under the light, which makes it impossible for them to see when the it changes. They also have no idea about how to gradually decelerate. If there is a red light, even if they see it from a kilometer away, they just go without reducing their speed, and then stop with screeching breaks at the last moment.

However, I have to mention that there is one good thing about the drivers here. They are super polite when it comes to pedestrians. Even if you are just getting closer to the pedestrian crossing, they stop to give you away. But I guess the reason is not that they are so polite, but they simply don’t want to hit the pedestrians who are walking around hypnotized by their phones, not looking around at the crossing. So the drivers rather not take the risk, they stop instead.

People here can’t drive or park without crashing everything around them. Once I was on the balcony having my breakfast and enjoying the morning sunshine, when I saw a car trying to force itself into a too small parking space. I was like: Hahaha, I am curious when will the driver realize that the space is too small.

But after a minute my curiosity turned into shock. I was staring at the scene with my eyes wide open. The driver instead of giving up, decided to push the two cars away to make the parking space bigger. He didn’t just bump into the other two cars in front and behind him, he literally pushed them away by accelerating. I was hearing while the engine roar that the parked car’s read plastic bumper fracture accompanied by loud cracking noise.

And this is quite common because almost every day I see cars in Malaga parked so close to each other that there is absolutely no gap left between to maneuver, therefore is the parked car in the middle wants to get out from the parking space, it has to toss the other two cars away. This is the crazy. In general, in Malaga people don’t care if there is not enough free space to park, they make it happen anyway, in their own way. 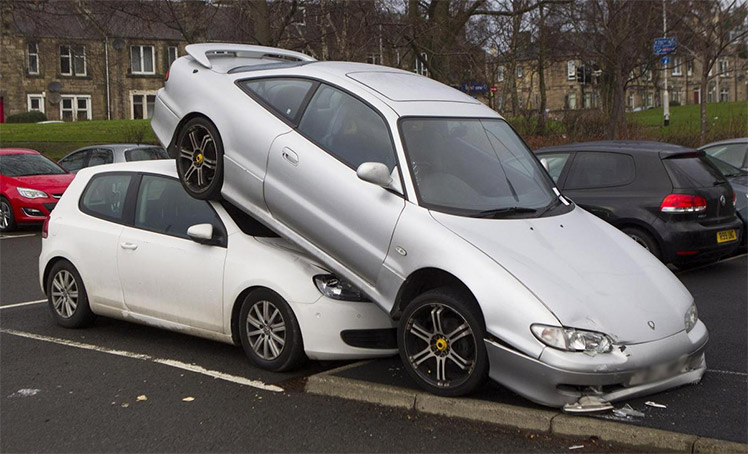 If Hollywood would be interested in making a real Mission Impossible movie, they could just film Tom Cruise while looking for parking space in Malaga. Often it’s impossible, because there are so many cars and so few parking lots. Parking facilities in the center are usually terrible because they are old and during the years cars got much bigger, so the designated spaces are barely enough for your Humvee, Escalade or Land Rover. Unless you have a tiny car, you might have trouble squeezing yourself into the tiny space and even if you nail it, you never know what kind of over-sized monster truck will park next to you or scratch your car.

Spanish are super calm, expect when they are driving

Spanish people in Malaga love using their car horns. If the traffic doesn’t have the flow they want, they just honk like nobody’s business. And it’s even true to the most ridiculous situations when the driver can clearly see that his honking won’t have any positive effect on the situation, but still… they just find it… I don’t know, maybe satisfies them when they can honk on something.

One time I was riding a bike that had brand new breaks and I was not used to that bike anyway. As I passed in front of a garage building’s entrance, I pulled the front break, which was surprisingly efficient, making me do a wheelie on the first wheel. Basically, I was dancing there upside down, balancing on the first wheel and on one of my legs, trying not to fall with the rest of the bike above me in the air. And then a car honked me that wanted to come out of the garage.

I was busy with some extra dance moves with the bike to get my balance back to not land not on my neck, so only when I managed to survive my not intentional stunt without an accident, I started thinking… what the hell just happened? The driver clearly saw that I am not wasting time and having fun there, practicing ballet moves with a bike, but I am fighting for my life in an weird way. Yes, I happened to be in front of the exist of the garage building, but what did he expect? That I stop my stunt show, step away a couple of meters and continue there, where I am not holding up anyone? Outrageous. 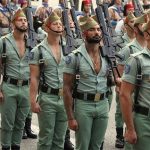