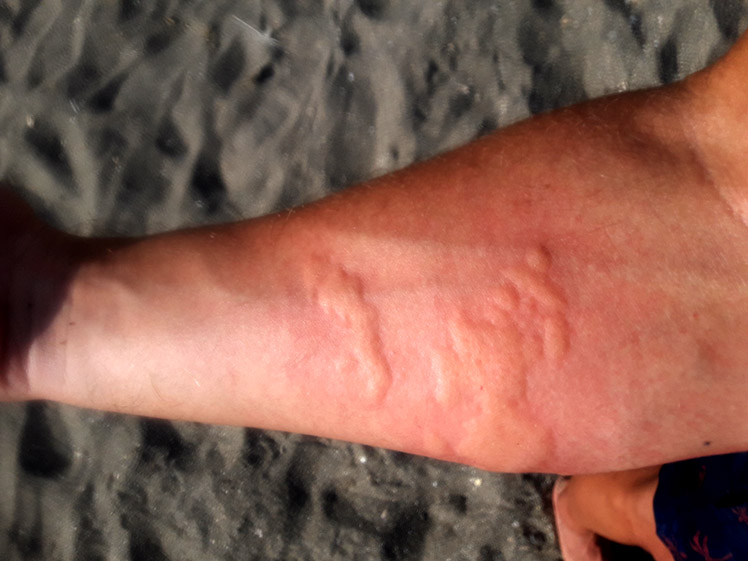 Yes, they are! In the past few years the number of jellyfishes grew exponentially along with the stings. Malaga is not only facing a jellyfish invasion, but there are also new, more dangerous jellyfishes appearing which can be dangerous.

Normally in Malaga, we have little purple jellyfishes which are pretty painful to meet with, but otherwise they are not really dangerous, unless you get stung by hundreds of them:

In the Costa del Sol they started to collect the jellyfishes with special boats with moderate success. It’s a fact that they managed to catch more than 15 tons of them, but that doesn’t mean that the water became safe and jellyfish free.

There is an application that supposedly can tell about the presence of jellyfishes, but as expected it’s pretty worthless. It just constantly say that on all the beaches in Malaga the chance of encountering jellyfishes is moderate. Well, that is not really helpful. Moderate can mean just enough to get stung by one, which can be very painful.

The top photo is my jellyfish sting that I got on the Malagueta beach. It was terribly painful for two hours, until I got home and took some painkillers. On the way home I went to a pharmacy where they told me that nowadays (Summertime) it’s very common, they have several people coming every day with similar stings. They gave me a Fenistil gel, which turned out absolutely worthless in my experience.

The next day my arm was not painful, I just left with ugly set sting marks which remained visible for two weeks. After the first week it was started to itch like crazy as the skin was started pealing off from the sting mark. Three weeks after the jellyfish sting the marks went away, leaving just a terrible memory behind. Earlier I went to swim to the sea almost every day until the yellow buoys and back, but after my jellyfish sting I stopped doing that. I prefer swimming pools now.

Why do we have so many jellyfishes lately in Malaga?

The problem is not just the elevated quantity of the jellyfishes but also the appearance of the new dangerous kinds, such as the nasty: Portuguese man o’ war (Physalia physalis). It can grow 30 meter long tentacles and their sting can supposedly cause even death, especially in children. Fun fact that technically it’s not even a jellyfish. It’s actually several organisms living together in symbiotic relationship forming this floating colony, helping each other because they cannot survive independently. Basically it’s made of three kinds of polyps, one on the top farting all day to fill that bubble hing with gas to let them float. The second kind is right under the fart factory, responsible for digesting the food that they catch and feeding the others and the third kind is on the bottom who are hunting for pray using the long tentacles, so they have something to digest and feed on. That is what I call real team work!

They are kind of easy to spot because unlike normal jellyfishes, it’s floating on the top of the water, using it’s semi transparent, blueish-purplish, gas filled bubble. Here is a photo for you, so you can see how does it look when you got far close: 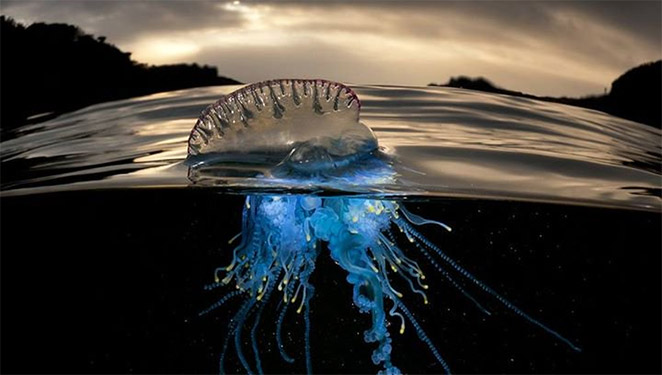 If you see one, the best you can do is to run away as fast as you can. They are not kidding when it comes to causing severe pain and even open wounds.

What to do if you get stung by this nasty thing?

First of all, don’t pee on it, that doesn’t work. That is an urban legend from the american series: Friends. Instead of peeing on yourself or each other, try this:

1. Remove tentacles with a stick or something similar. Don’t touch or rub!
2. Rinse with salt water. Not with fresh water!
3. Go home if the pain is severe. The victim will likely be out of action for the afternoon.
4. Rinse affected area with hot water. This helps neutralize the poison.
5. Apply ice to help soothe the pain.
6. Take at least 3-5 Grams of vitamin C to neutralize the toxin.
7. Crush vitamin C, baking soda and water to create a paste. Apply the paste to the affected areas to pull the toxin from the stings.

Please note, that this vitamin C treatment is suggested to this kind of Jellyfish sting. If you got bitten by the small purple one, you can try vinegar too, to neutralize the toxin on the sting area. 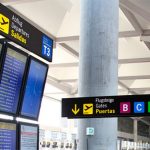 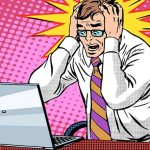